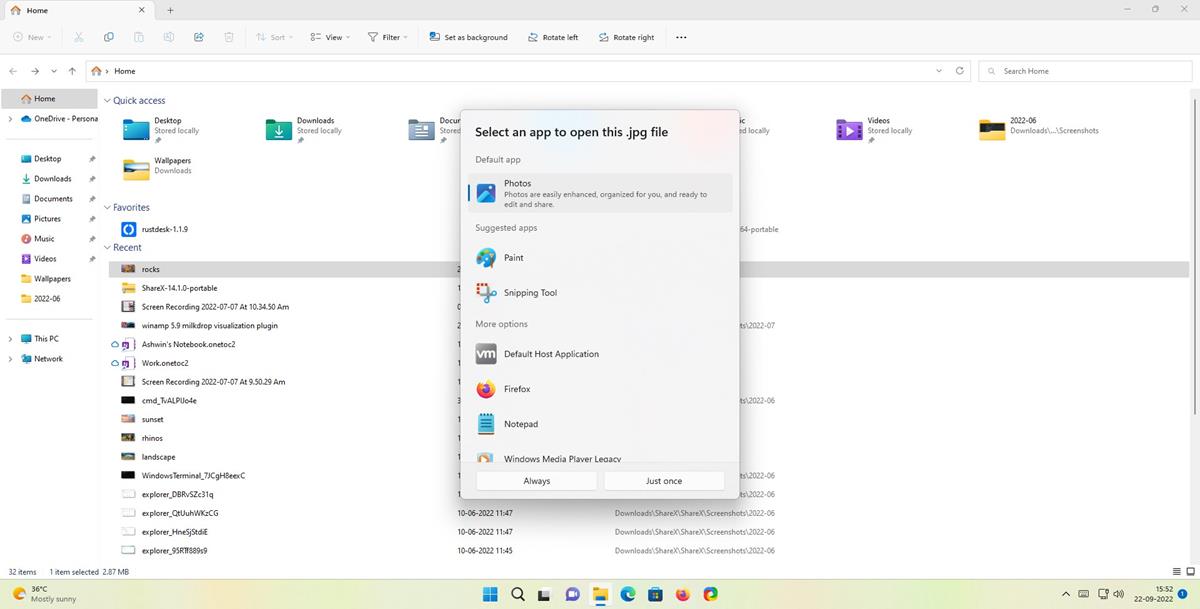 Windows 11 Insider Preview Build 25206 is now available for all users in the Dev Channel. It enables the new Open With dialog box for all users, and brings some fixes.

This is what the File Explorer's Open With dialog looks like in the stable version of Windows 11. 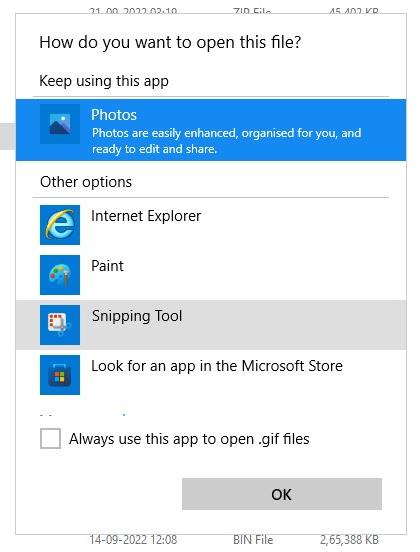 And here's the new style was introduced in Build 25151, which was released in June this year. It looks modern, and matches the colors, icons, design standards that were introduced in Windows 11, with rounded corners. 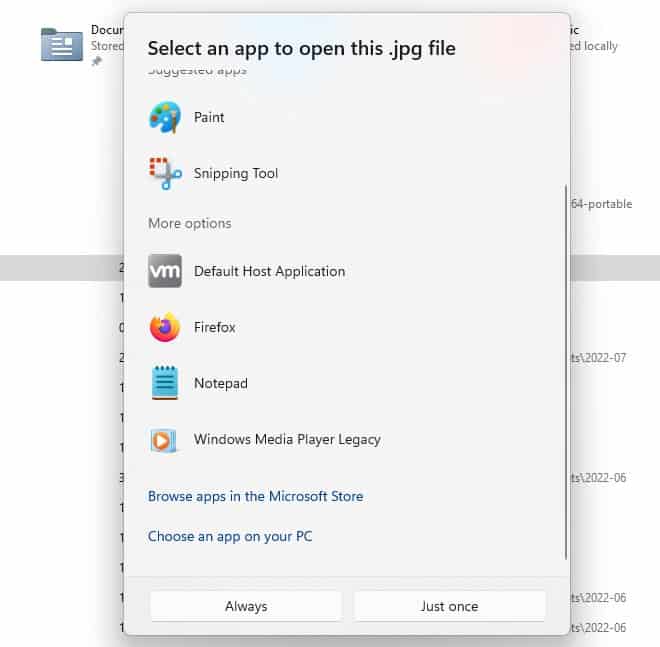 But despite the change in its appearance, the menu is quite similar to the old version in terms of functionality. The new Open With dialog box displays the default app (that opens the selected file format) at the top of the list, shows you the suggested apps and more options that you can choose from. You will need to scroll down a bit in the menu, to see the options to choose an app on your PC, and to download an app from the Microsoft Store.

On a side, the Search tool in File Explorer's Home screen displays the recent file activity for cloud files in Details View.

Windows 11 Build 25206 allows users to save power by enabling Dynamic Refresh Rate (DRR) on supported monitors. To set it up, open the Settings app System Display Advanced display, and select your screen's Refresh Rate. The feature is restricted to monitors that support 120+Hz VRR (Variable Refresh Rate). You will also need to have a WDDM 3.1 driver installed on the computer.

Microsoft is adding support for password fields to the Clipboard History feature, which will allow users to hit the Win + V hotkey to paste text in the password box. This feature is not available for all users yet.

Microsoft has added an extra layer of security to the SMB server service. It implements a delay between each failed NTLM authentication, to protect servers from brute force attacks. An example given by the company says that "If an attacker previously sent 300 brute force attempts per second from a client for 5 minutes (90,000 passwords), the same number of attempts would now take at least 50 hours."

The new mechanism is enabled by default in Build 25206, and is set to 2000ms (2 seconds). Failed login attemps such as bad usernames or passwords sent to the SMB will cause a 2-second delay.

OneDrive was asking users to set up after every reboot, this bug has been fixed. Microsoft says that it fixed a crash issue in Explorer.exe. A couple of crashes related to Search and Settings (searching/selecting Narrator options) have been resolved. You can now resize the Windows Sandbox's window after snapping it to a side of the screen. A bug that was causing a memory leak in Windows Error Reporting after crashes has been patched. The Shut Down dialog now displays the computer icon. Using the Alt + F4 and enter hotkey will shutdown the computer instead of shifting the keyboard focus.

Build 25206 has 2 new known issues. Windows 11 may display an error that says “date, time and time zone settings are incorrect”, and prevents the installation of the update. UWP apps may not work correctly after using the Reset this PC option. Microsoft is advising users who have Build 25201 or higher, to backup their data and download the latest ISO for the Windows 11 Dev Channel and perform a clean install.

You can find the full list of changes and issues in Build 25206 at the Windows Insider Blog.

Windows 11 Insider Preview Build 22621.601 and 22622.601 are available for users in the beta channel. The builds include fixes for issues related to the Lock Screen, Daylight Saving Time in Chile, Dual SIM calling, and Dynamic Host Configuration Protocol.

Microsoft has released Windows 11 Insider Preview Build 25206. It enables the Open With dialog box for all users

Source: https://www.ghacks.net/2022/09/22/windows-11-insider-preview-build-25206-whats-new/
We use cookies to ensure that we give you the best experience on our website. If you continue to use this site we will assume that you are happy with it. Ok