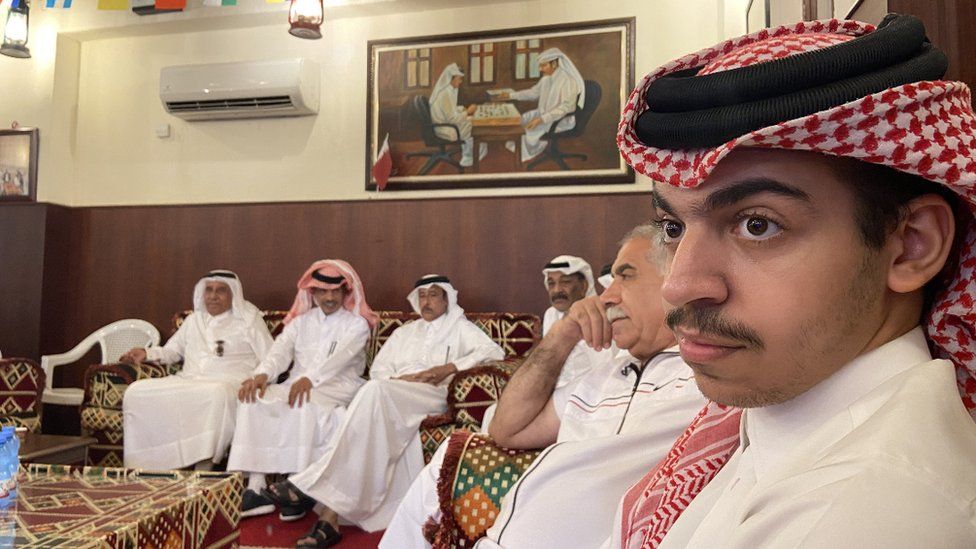 In Doha's bustling Souq Waqif, the excitement is palpable.

Walking around the marketplace, you can hear so many different languages as fans wave the flags of the teams they support.

Every now and then, a group spontaneously erupts into cheers.

The Mexican, Moroccan and Argentine crowds are particularly animated and diners watch on as they enjoy their meals and Shishas.

An artist is putting the final touches on a charcoal portrait of Lionel Messi. Young children are wearing the Qatari national jersey.

"People from around the world are here now," Nasser, who did not share his last name, tells me, pointing to the crowds in the market. "For us Qataris - this is a proud day."

Then all eyes are on the big screens in cafes as the opening ceremony starts.

"I can't quite describe how I feel. My small country is now the centre of the world," Naji Rashed Al Naimi tells me.

He's the head of The Qatari Dama club at the market, a traditional game similar to chess. We sit in the Majlis - a traditional sitting room - with his friends all gathered around the TV.

"We've been through so much to get here. So many difficulties and challenges," Mr Al Naimi tells me.

He and his friends are keen to tell us about the symbolism of the ceremony - the history of Qatar and how far the Gulf state has come from the old days in the desert, to hosting the World Cup.

The crowd in the sitting area applaud as the Emir Tamim Bin Hamad Al Thani, and his father, the former Emir Hamad bin Khalifa Al Thani, arrive. An archive video shows the young former leader playing football in the desert.

So far though, controversy has overshadowed the football.

The latest was the last-minute ban on beer sales in stadiums only two days before the start of the tournament.

There have also been fears over how LGBT fans can expect to be treated given the country's strict adherence to Sharia law - homosexuality is illegal in Qatar - as well as the treatment of migrant workers.

But you wouldn't know this was one of the most contentious and debated World Cups - sitting among this group of Qatari men.

"This was a dream, now you can see it in front of you. I'm so proud," Salem Hassan Al Mohanadi tells me. "All those who criticised us... we said nothing. Today we've showed them."

"These [criticisms] sadden me," Saad Al Badr told me with one eye on the Qatar-Ecuador game.

"For 12 years, we were worried, not knowing whether it was going to really happen or not. Now here we are."

This has not been smooth sailing for the small and hugely affluent Gulf state. It has a lot to prove still.

For the next month Qatar has to strike a balance between being at the world's centre stage and maintaining its cultural, religious, and conservative identity.

It's a big day not just for the host country but for the whole region, where the tournament is being held for the first time.

"This World Cup doesn't belong to Qatar only," Mr Al Mohanadi tells me. "It also belongs to all Arabs and Muslims."

We use cookies to ensure that we give you the best experience on our website. If you continue to use this site we will assume that you are happy with it. Ok